http://aceee.org/press/2013/12/us-energy-department-pay-television-
Non-Regulatory Consensus Agreement to Cut Five Million Tons of CO2 Annually
On December 23, 2013, the U.S. Energy Department, the Natural Resources Defense Council (NRDC), the American Council for an Energy-Efficient Economy (ACEEE), the Appliance Standards Awareness Project (ASAP), the Consumer Electronics Association (CEA)® and the National Cable & Telecommunications Association (NCTA) announced non-regulatory energy efficiency standards for pay-TV set-top boxes that will result in significant energy savings for more than 90 million U.S. homes. These new standards – developed through a non-regulatory agreement between the pay-TV industry, the consumer electronics industry and energy efficiency advocates – will improve set-top box efficiency by 10 to 45 percent (depending on box type) by 2017, and are expected to save more than $1 billion on consumer energy bills annually.

The set-top box efficiency standards announced today will ultimately save enough electricity each year to power 700,000 homes. The standards will also avoid more than five million metric tons of carbon dioxide emissions each year. As consumer demand for digital video recorders and high-definition set-top boxes grows, actual consumer savings are likely to be even greater. The introduction of whole-home devices will also further reduce the overall energy footprint.... 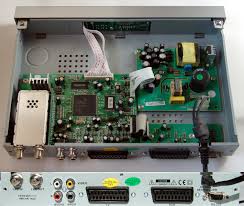 http://en.wikipedia.org/wiki/Set-top_box
Senator Dianne Feinstein (D-Calif.) said:  “In 2011, I urged the CEOs of every major television service provider to work together to introduce more energy efficient set-top boxes.  At the time, set-top boxes were costing Americans $3 billion in electricity charges each year—with $2 billion wasted when televisions were not being used.  Today’s voluntary announcement demonstrates the television industry took this matter seriously, and I commend industry and efficiency advocates for agreeing to make 90 percent of all set-top boxes as efficient as today’s most energy efficient boxes by 2017.  This will cut box energy consumption by 10-45 percent and save consumers $1 billion per year.  To put that in perspective, this amount of energy savings would eliminate the need for three power plants and prevent 5 million tons of C02 emissions per year.  This is a big win for nearly every American who pays a monthly television bill because experts tell me that federal standards could not have produced this much financial and energy savings by 2017.  This agreement lasts until 2017, and I intend to monitor the situation carefully to ensure the industry remains committed to building on today’s substantial progress in future years.”
...
A set-top box is a device combining hardware components with software programming to receive television and related services from cable, satellite, broadband or local networks. The non-regulatory agreement provides a framework for the Energy Department, pay-TV industry and energy efficiency advocates to work together on efficient, high-performing set-top boxes that keep pace with technological improvements, achieving what would otherwise be done through regulatory standards and test procedures.
...
This non-regulatory agreement between the pay-TV industry and energy efficiency advocates supports the Energy Department’s broader efforts to help families save money by increasing the energy efficiency of residential and commercial appliances and products. Under the Obama Administration, the Department has finalized new efficiency standards for more than  30 household and commercial products, which are estimated to save consumers a total of  more than $400 billion through 2030.
...
The agreement, which runs through 2017, covers all types of set-top boxes from pay-TV providers, including cable, satellite and telephone companies. The agreement also requires the pay-TV industry to publicly report model-specific set-top box energy use and requires an annual audit of service providers by an independent auditor to ensure boxes are performing at the efficiency levels specified in the agreement. The Energy Department also retains its authority to test set-top boxes under the ENERGY STAR ® verification program, which provides another verification tool to measure the efficiency of set-top boxes.

To build on this progress, the Administration has set a new goal: Efficiency standards for appliances and federal buildings set in the first and second terms combined will reduce carbon pollution by at least three billion metric tons cumulatively by 2030 – equivalent to nearly one-half of the carbon pollution from the entire U.S. energy sector for one year.

The non-regulatory agreement ... is available at:
http://www.ncta.com/energyagreement.