... There’s more: LED bulbs also turn on to full brightness instantly. They’re dimmable. The light color is wonderful; you can choose whiter or warmer bulbs. They’re rugged, too. It’s hard to break an LED bulb, but if the worst should come to pass, a special coating prevents flying shards.

Yet despite all of these advantages, few people install LED lights. They never get farther than: “$30 for a light bulb? That’s nuts!” Never mind that they will save about $200 in replacement bulbs and electricity over 25 years. (More, if your electric company offers LED-lighting rebates.)
...
[However] LED bulbs now cost less than $10.  Plus several companies make bulbs that can be any color you want.

[David Pogue of the New York Times] tried out a "whole Times Square’s worth of LED bulbs and kits from six manufacturers."

3M ADVANCED LED BULBS On most LED bulbs, heat-dissipating fins adorn the stem. (The glass of an LED bulb never gets hot, but the circuitry does. And the cooler the bulb, the better its efficiency.) As a result, light shines out only from the top of the bulb.  But the 3M bulbs’ fins are low enough that you get lovely, omnidirectional light.These are weird-looking, though, with a strange reflective material in the glass and odd slots on top. You won’t care about aesthetics if the bulb is hidden in a lamp, but $25 each is unnecessarily expensive; read on.

CREE LED BULBS Cree’s new home LED bulbs, available at Home Depot, start at $10 apiece, or $57 for a six-pack. That’s about as cheap as they come. The $10 bulb provides light equivalent to that from a 40-watt incandescent. Cree’s 60-watt equivalent is $14 for “daylight” light, $13 for warmer light.The great thing about these bulbs is that they look almost exactly like incandescent bulbs. Cree says that its bulbs are extraordinarily efficient; its “60-watt” daylight bulb consumes only nine watts of juice (compared with 13 watts on the 3M, for example). 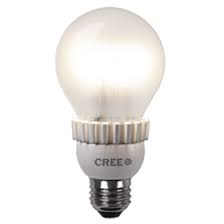 The Cree Light Bulb www.cree.com
...
By setting new brightness-per-watt standards that the 135-year-old incandescent technology can’t meet, the federal government has already effectively banned incandescent bulbs.
...
Separately (http://apps1.eere.energy.gov/news/progress_alerts.cfm/pa_id=855), on March 20, 2013 as part of the Obama Administration's efforts to reduce energy waste in our nation's buildings and help save Americans money by saving energy, the Energy Department today announced the winners of the fifth annual Next Generation Luminaires™ Design competition for indoor lighting at the LEDucation 7 conference in New York City. Sponsored by the Energy Department, the Illuminating Engineering Society of North America, and the International Association of Lighting Designers, the competition promotes excellence in the design of energy-efficient light-emitting diode (LED) commercial lighting fixtures, or "luminaires." Solid-state lighting technologies, which include both LED and organic light emitting diode technologies, have the potential to save Americans $30 billion a year in energy costs by 2030.
A panel of 11 judges from the architectural lighting design community evaluated nearly 100 indoor lighting entries based on lighting quality, appearance, serviceability, efficacy, value, and dimming. The "best-in-class" winners represent three different manufacturers and cover three distinct indoor lighting areas:

In addition to the three "best-in-class" winners, 25 other entries were judged as meeting the rigorous requirements of the competition. These recognized winners represent a wide range of manufacturers and lighting applications, including linear lighting, linear pendant lighting, personal task lighting, under cabinet lighting, wall washing, and utility lighting. Four additional products, which were not otherwise recognized, were noted for their color-adjusting capabilities. More information on all of the winning entries is available at the Next Generation Luminaires website.

More information on all of the winning entries is available at the Next Generation Luminaires website.
For more information about the DOE solid-state lighting portfolio, visit EERE's Solid-State Lighting website.
DOE's Office of Energy Efficiency and Renewable Energy accelerates development and facilitates deployment of energy efficiency and renewable energy technologies and market-based solutions that strengthen U.S. energy security, environmental quality, and economic vitality.

Posted by Environmental Valuation and Cost-Benefit News at 7:05 PM