http://dx.doi.org/10.1016/j.ecolecon.2012.10.012
Abstract:
As a result of anthropogenic activities, ozone is produced in the surface atmosphere, causing direct damage to plants and reducing crop yields. By combining a biophysical crop model with an economic supply model we were able to predict and quantify this effect at a fine spatial resolution. We applied our approach to the very varied French case and showed that ozone has significant productivity and land-use effects. A comparison of moderate and high ozone scenarios for 2030 shows that wheat production may decrease by more than 30% and barley production may increase by more than 14% as surface ozone concentration increases. These variations are due to the direct effect of ozone on yields as well as to modifications in land use caused by a shift toward more ozone-resistant crops: our study predicts a 16% increase in the barley-growing area and an equal decrease in the wheat-growing area. Moreover, mean agricultural gross margin losses can go as high as 2.5% depending on the ozone scenario, and can reach 7% in some particularly affected regions. A rise in ozone concentration was also associated with a reduction of agricultural greenhouse gas emissions of about 2%, as a result of decreased use of nitrogen fertilizers. One noteworthy result was that major impacts, including changes in land use, do not necessarily occur in ozone high concentration zones, and may strongly depend on farm systems and their adaptation capability. Our study suggests that policy makers should view ozone pollution as a major potential threat to agricultural yields.

► Ozone impact on French agriculture is modeled for three 2030 climate scenarios.
► Ozone pollution impacts are spatially and temporally heterogeneous.
► An increase in barley production and a decrease in wheat production are simulated.
► Ozone impact reduces the agricultural gross margin, by 2% in the worst-case scenario.
► Ozone pollution reduces fertilizer use and thus GHG emissions.

Fig. 1. Ozone impact on wheat yield-to-nitrogen response function. Given the N-input, ozone leads to a decrease of yield (from the blue to the red curve) and therefore modifies the position of the economic optimum reached when the slope of the tangent to the curve is equal to the price ratio (selling price of the crop divided by the price of the N fertilizer). (For interpretation of the references to color in this figure legend, the reader is referred to the web version of this article.) 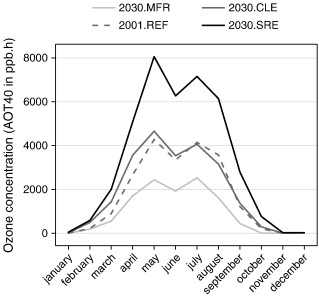 Fig. 3. Evolution of the mean AOT40 (in ppb) throughout the year in France for the 4 different 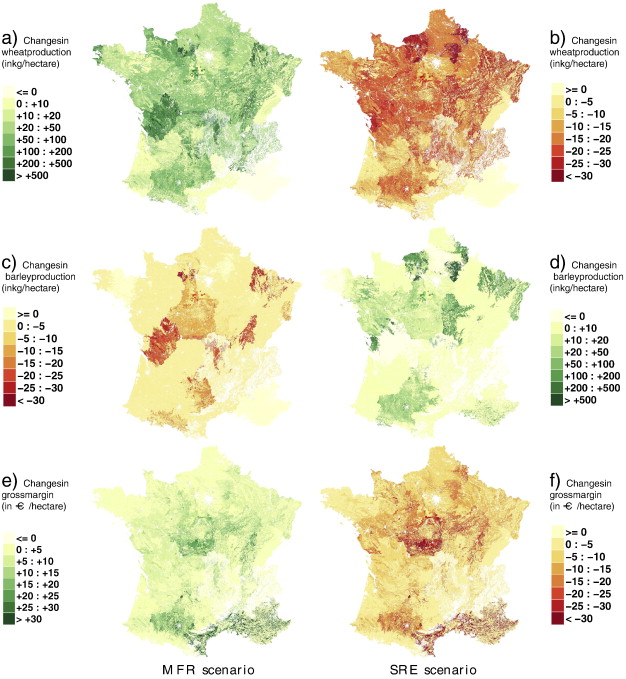 Fig. 8. Overview of the spatialized estimations of wheat and barley changes in production and gross margin variations. The maps present the variations for the two most extreme scenarios for 2030 (MFR and SRE) compared with 2001. The changes are presented in kilograms per hectare for a), b), c) and d) and in € per hectare for e) and f) (decrease: red, increase: green). (For interpretation of the references to color in this figure legend, the reader is referred to the web version of this article.)

Fig. 9. Variation in regional gross margin for the two extreme scenarios (2030-MFR: gray, 2030-SRE: black) compared with the year of reference (2001), for all regions. “MEAN” represents the average variation. The modeling predicts a considerable heterogeneity within the different regions. 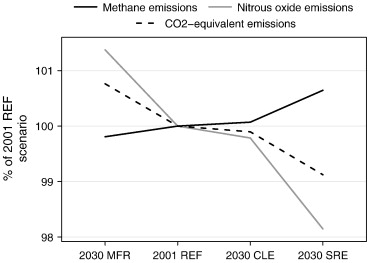