The distributional effects of pollution regulations: Do renters fully pay for cleaner air?

http://dx.doi.org/10.1016/j.jpubeco.2012.06.006
Abstract: Changes in housing prices play an important role in determining the incidence of environmental regulations: if the increase in value due to changes in environmental amenities is fully passed forward in the form of higher rental prices, renters may receive no net benefit from the regulations. To estimate the pass-through of the value of an environmental amenity, I exploit the reduction in suspended particulate matter (PM10) due to the 1990 Clean Air Act Amendments (CAAA). Using instrumental variables at varying levels of spatial aggregation I find that the 1990 CAAA led to a significant increase in rents, but the estimated percentage effect is about half as large as that of owner-occupied housing values. Little of this difference is driven by income differences between renters and homeowners; when stratifying by income and comparing the effect of the 1990 CAAA on housing values and rents, point estimates suggest that half of the increase in value is passed on to renters in the form of higher rents. This suggests that pass-through may be incomplete, but landowners still capture much of the value of the air quality regulations.

► I study the housing market effects of the 1990 Clean Air Act Amendments.
► Rents are less responsive to changes in pollution than owner-occupied housing values.
► This holds when stratifying by income, suggesting the “pass-through” may be incomplete.
► This has implications for the distributional effects of pollution regulations.
► Results are robust to alternative specifications and levels of spatial aggregation.
...
The 1990 CAAA had a significant impact on owner-occupied housing values. The estimates suggest that housing values in nonattainment counties increased an average of between $7,600 and $10,200 due to the reductions in PM10 concentrations from the 1990 CAAA, which represents a capital gain for homeowners at the time of improvement.

The capitalization of cleaner air into rents may actually harm lower income groups if prices increased more than their marginal willingness to pay. Instrumental variables estimates suggest that a one unit decrease in PM10 concentrations led to an increase of around 1/2 to 1 percent in the median rent. In 1990, the median monthly rental rate in the counties in this sample was about $558 (in 2000 dollars), which implies that the 1990 CAAAs caused an annual increase in rental prices of up to $281 by 2000. That represents just less than 1% of the median household income for renters.

This study finds that changes in particulate matter were capitalized into property values, but rents were not as responsive as owner-occupied housing values. The aggregate annual value of this capitalization in nonattainment counties is roughly $5.3 Billion.24 However, one should be careful when making welfare judgements using this type of reduced-form framework (Kuminoff and Pope, 2010). That said, it may be useful to put these numbers in context. A back-of-the-envelope calculation can be used to determine the comparable benefits of nonattainment designation from my first stage regression. Following Krupnick et al (2003), one can assume a value of a reduction in PM10 concentrations by one unit to have a value equal to $55 per person over the age of 30. In 1990, roughly 54% of the population was over 30 years old, which translates into an average of roughly 316,153 people in counties that later were designated as nonattainment areas. Thus, for a 4.1 unit decrease in PM10 concentrations (the average effect of nonattainment status, from the first stage regressions), the annual value for nonattainment counties was roughly $4.9 Billion.

Though a standard model may predict perfect pass-through to landowners, the theoretical prediction regarding the pass-through of the value of an amenity could be ambiguous if one strays from classical.  This assumes a 5% discount rate to convert the owner-occupied housing price change into an annualized estimate. To arrive at this figure, assume that the impact of nonattainment status is a 4.1 unit decrease in PM10concentrations. There are 69 nonattainment counties in my dataset, and there are an average of 123,227 owner-occupied units and 88,221 rental units in nonattainment counties. Estimates suggest rents increased about $280 per year due to nonattainment designation, and owner-occupied values increased by a total of $8,900–this corresponds to an annual increase in value of about $424. Aggregating over nonattainment areas yields an estimate of approximately $5.3 Billion. Note that this value includes only the estimated changes in nonattainment areas due to the changes in regulations. 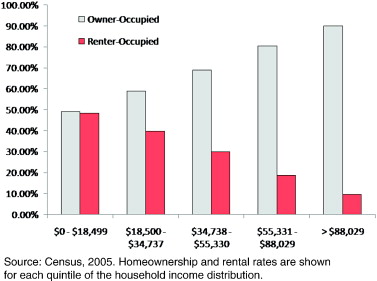 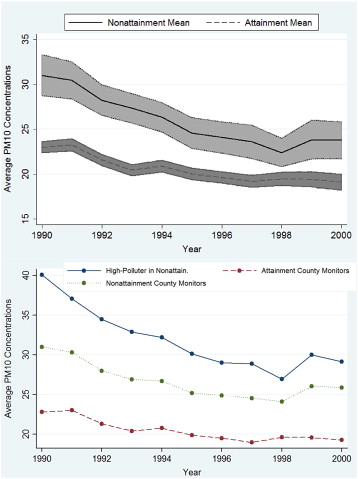 by Corbett A. Grainger